Sedimentary systems developed in small (<1 km2) mountain lacustrine basins represent high-resolution geological archives, able to record subtle climatic and tectonic signatures over historical times. The studied example from the Mt. Ragola ophiolitic massif in the Northern Apennines (Italy) allowed us to better understand the role of the different (neo)tectonic and climatic events on the development and distribution of large landslides and lakes/peat bogs during the last 10 kyrs. Implementing a multidisciplinary approach that includes detailed acquisition of bedrock, geomorphological, topographic, and geophysical data, we detected and mapped ridge splitting, trenches, closed depressions, double ridges, and counterscarps. These morphostructures are interpreted as relevant factors influencing the distribution of sediments in historical times by shifting the position of the local equilibrium point (i.e., erosion vs. deposition) and have been correlated to a combination of climatic (i.e., increased flood events) and tectonic (i.e., spatial–temporal clustering of seismic shocks) forcing, starting from the demise of the Little Ice Age in the mid-19th century to the present-day situation. This approach allowed us to better describe the current changes in the hydrologic cycle, reaching beyond the limits of historical instrumental data. Furthermore, allowing the recognition and dating of recent tectonic vs. gravitational deformations, it also constitutes an integrative method for assessing the local geological hazard. 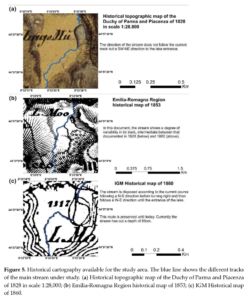