A European map of groundwater pH and calcium

Water resources and associated ecosystems are becoming highly endangered due to ongoing global environmental changes. Spatial ecological modelling is a promising toolbox for understanding the past, present and future distribution and diversity patterns in groundwater-dependent ecosystems, such as fens, springs, streams, reed beds or wet grasslands. Still, the lack of detailed water chemistry maps prevents the use of reasonable models to be applied on continental and global scales. Being major determinants of biological composition and diversity of groundwater-dependent ecosystems, groundwater pH and calcium are of utmost importance. Here we developed an up-to-date European map of groundwater pH and Ca, based on 7577 measurements of near-surface groundwater pH and calcium distributed across Europe. In comparison to the existing European groundwater maps, we included several times more sites, especially in the regions rich in spring and fen habitats, and filled the apparent gaps in eastern and southeastern Europe. We used random forest models and regression kriging to create continuous maps of water pH and calcium at the continental scale, which is freely available also as a raster map (Hájek et al., 2020b; https://doi.org/10.5281/zenodo.4139912). Lithology had a higher importance than climate for both pH and calcium. The previously recognised latitudinal and altitudinal gradients were rediscovered with much refined regional patterns, as associated with bedrock variation. For ecological models of distribution and diversity of many terrestrial ecosystems, our new map based on field groundwater measurements is more suitable than maps of soil pH, which mirror not only bedrock chemistry but also vegetation-dependent soil processes.

Model predictions based on regression kriging. Note that the Ca 2+ concentration is on an ln scale. The map was created entirely by the authors with state borders from ArcGIS® version 10.2 (Esri, Redlands, CA, USA). 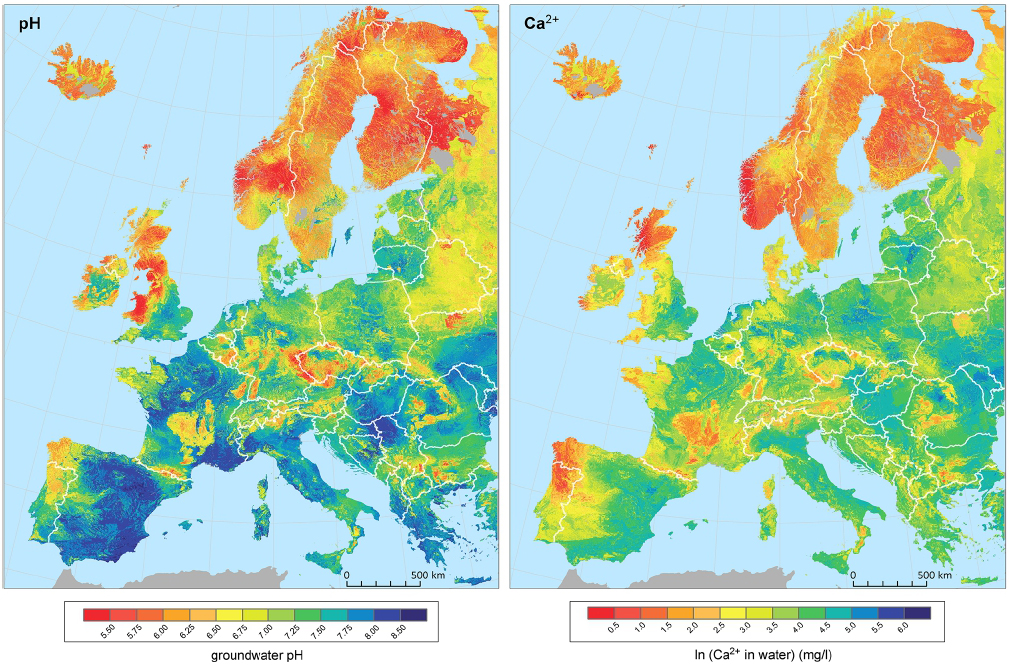